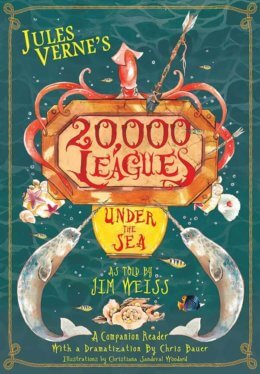 20,000 Leagues Under the Sea Companion Reader

Lost at sea, three friends find themselves on a fantastic underwater ship, the Nautilus. You will dive deep into adventure as our heroes battle giant squid, navigate dangerous oceans, and discover new creatures and fabulous treasures. But who is the mysterious Captain Nemo? Why is he being hunted by every navy on earth? And will he ever let the three castaways return home?

This beautifully illustrated Companion Reader is an exact transcript of Jim Weiss’s award-winning storytelling performance of Jules Verne’s Twenty Thousand Leagues Under the Sea, available on MP3 and audio CD from Well-Trained Mind Press. The Reader can be enjoyed on its own, or used along with the recorded performance to build strong language skills.

Listen to the Jim Weiss story, read along to improve fluency, vocabulary, and grammar, and then speak great words and sentences out loud by practicing and performing the short, accessible dramatic version of Jim’s performance. A complete script, stage direction, and acting tips are included.

Save money when you buy the book and the audiobook together, in physical, digital, or mixed form.

Chris Bauer is a writer and actor based in Chicago.  He received his BA in Drama from the University of Virginia in 2014, and since then has been acting and writing in Virginia, New York, and Chicago, doing film and theater for both children and adults.  He is currently studying acting and writing at the Second City.

Christiana Sandoval is an artist and illustrator based in Richmond, Virginia. You can find more of her artwork on her website.