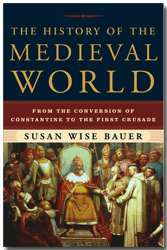 Bring history to life with this compelling narrative approach. Crusades, conquests, castles – take a front-row seat to the drama of the Middle Ages. Ideal as the spine for advanced high school history studies, this book also makes compelling reading for adults interested in the grand sweep of history.
.

The History of the Medieval World is a true world history, linking the great conflicts of Europe to the titanic struggles for power in India and Asia. In its pages, El Cid and Guanggaeto, Julian the Apostate and the Brilliant Emperor, Charles the Hammer and Krum the Bulgarian stand side by side. From the schism between Rome and Constantinople to the rise of the Song Dynasty, from the mission of Muhammad to the crowning of Charlemagne, from the sacred wars of India to the establishment of the Knights Templar, this erudite book tells the fascinating, often violent story of kings, generals, and the peoples they ruled. Originally written for adults who want to learn more about history, it can also form a world history spine for advanced high schoolers who enjoy the subject – just add the Study & Teaching Guide for a complete year’s study.

Susan Wise Bauer provides both sweeping scope and vivid attention to the individual lives that give flesh to abstract assertions about human history. Dozens of maps provide a clear geography of great events, while timelines give the reader an ongoing sense of the passage of years and cultural interconnection. This narrative history employs literature, epic traditions, private letters and accounts to connect kings and leaders with the lives of those they ruled. The result is an engrossing tapestry of human behavior from which we may draw conclusions about the direction of world events and the causes behind them.