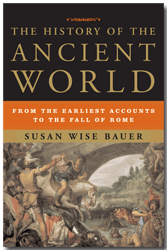 The History of the Ancient World: From the Earliest Accounts to the Fall of Rome

Bring history to life with the compelling narrative approach of The History of the Ancient World. Ideal as the spine for high school history studies, this book also makes compelling reading for adults interested in the grand sweep of history.

Bring history to life with the compelling narrative approach of The History of the Ancient World. Ideal as the spine for high school history studies, this book also makes compelling reading for adults interested in the grand sweep of history.

Using the narrative approach to history so popular in the Story of the World series, Susan Wise Bauer introduces readers to the people, places, and events of the ancient world.

This lively and engaging narrative history shows the common threads in the cultures that gave birth to our own. This is the first volume in a bold series that tells the stories of all peoples, connecting historical events from Europe to the Middle East to the far coast of China, while still giving weight to the characteristics of each country. Susan Wise Bauer provides both sweeping scope and vivid attention to the individual lives that give flesh to abstract assertions about human history.

Dozens of maps provide a clear geography of great events, while timelines give the reader an ongoing sense of the passage of years and cultural interconnection. This narrative history employs the methods of “history from beneath”–literature, epic traditions, private letters and accounts–to connect kings and leaders with the lives of those they ruled. The result is an engrossing tapestry of human behavior from which we may draw conclusions about the direction of world events and the causes behind them.

This book is ideal for high schoolers or for adults who want the great history instruction their children are receiving. Use the  The History of the Ancient World Study Guide to transform it into a full year of high school history study!

“Bauer’s elegant prose and her command of much of the material makes this a wonderful starting point for the study of the ancient world.”–Publishers Weekly.

“Bauer’s annals, which span the millennia between the traces of Sumer and the Roman emperor Constantine’s conversion to Christianity in 312 CE, are an attractive introduction to a subject vast in time and geography. She writes briskly and interpretively and is attuned throughout to the challenge of rulers: appearing to the ruled as legitimate holders of power. This sensibility makes her narratives acutely interesting, as Bauer pierces the biases inherent in most ancient sources to discern the sincerity or the cynicism with which power seekers pursued their goals. Above, approval of the divine was invaluable; on Earth, a loyal army was indispensable. Acquiring both enabled lawgivers to make their writ stick, and Bauer’s chronicles exhibit the interaction of priestly, military, and legal powers as empires and dynasties wax and wane. This endows continuity to her accounts of politics as disparate as the Harappan civilization of the Indus River or the states that emerged from misty prehistory along the Yellow and Yangtze rivers to form China. Nonacademic and sometimes colloquial in composition, Bauer’s survey will spark the imagination.” —Booklist

“Sets a new standard for accessible history surveys…provides an ideal structural framework for understanding pieces of the past as part of a broad pageant of history rather than as isolated episodes.” –World History Bulletin, XXIV.1

“This succinctly formatted yet very informative and easily digested historical reference covers the rise and fall of all major ancient civilizations in Europe, Egypt the Middle East, India, and China with just the right amount of detail for those of us who are not pursuing PhDs in ancient history. It is basically two college classes in one easy-to-read book.”–United States Naval Academy Recommended Title