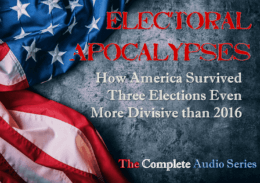 This three-part audio series sheds light on the stormy present by exploring the turbulent past. Through the surprising tales of three divisive presidential elections, master storyteller Jim Weiss explores the flexibility of America’s democratic system, and the resilience of its people.

Electoral Apocalypses, Episode 3: The Whole World Is Watching: Riots, Radicals, and the Election of 1968

Each episode is a downloadable MP3 file.
Your purchased, downloadable files are always accessible for re-download, whenever you need them, in your Well-Trained Mind account.