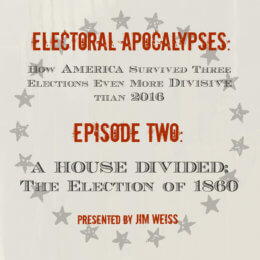 Electoral Apocalypses, Episode 2: A House Divided: The Election of 1860 and the Coming of the Civil War (Downloadable MP3)

Our three-part audio series, Electoral Apocalypses, sheds light on the stormy present by exploring the turbulent past. Through the surprising tales of three past elections, master storyteller Jim Weiss explores the flexibility of America’s democratic system, and the resilience of its people.

Tumultuous political conventions, delegates who refuse to support official nominees, terrorist attacks, and confrontations in the streets as a nation searches its soul. It may sound all too contemporary, but this was the election of 1860.

Storyteller Jim Weiss puts you right into the action as the United States, its political parties, and its ordinary citizens wrestle with the issue of slavery, using words, ballots, and finally bullets to settle their differences. Even listeners who think they know all about this era may find some surprises in Jim’s new recording.