Below is a list of errors that have been found in the Key to the Purple Workbook (formerly Key for Student Workbook #1) for Grammar for the Well-Trained Mind. As we correct the errors in subsequent printings/editions, we will note that they have been corrected.

If you discover an error that is not on this list, contact one of our editors to add it.

Page 25, Exercise 14D, “will be festering” should be underlined

In the last chart of 2B, the Progressive Future should be “They will be sneezing.”

Exercise 19B: Forming Progressive Present, Past, and Future Tenses

Exercise 19B: Forming Progressive Past and Future Tenses

Exercise 25E: The sentence “The hideous powerful…” and “A colossal billowing” should have commas between the adjectives in the series.

Week 7, Exercise 28A, in the sentence “Almost no data (was/were) gathered…” the correct answer is “were”

Exercise 33C, the diagram of “He stopped suddenly” is incorrect. “Suddenly” is an adverb and should go under the verb “stopped.”

Exercise 41B, the diagram of “Queen Victoria was a great ruler of England” is incorrect.  The line between “was” and “ruler” should be slanted, indicating a predicate nominative.

Exercise 48A: Principal Parts, the answers for the verb “speak” should read:   Speak   spoke   spoken

Exercise 52A, in the sentence that says

The word “them” before the parentheses should not be there.

Exercise 52C, the 2nd sentence should be: There was a creaking above, and something rattled and shook. And it should be diagrammed as below: 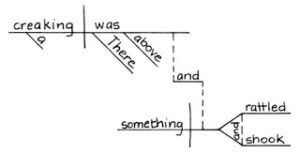 Directions in Exercise 64A: Add “present participle” to the list of things a sentence could contain.

The diagrams in Exercise 64B are correct, but three of the answers in Exercise 64A are incorrect. “Consuming the town and the castle” modifies “flame,” and “finding him” modifies “made.” And in the sentence about Percival and Lamorak, the circled phrase should have been labeled ADJ.

Exercise 67C, fourth sentence, the choices listed in the Key should be (worse/worst)

Exercise 80A, the sentence that starts with “Then still sobbing”…the two little circles inside the big circle should NOT include the words “that the thing.” they should go around “which he had done” and “whatever it was”

In exercise 115A, The sentence portion starting with “that a duel would have” should be labeled “perfect past,” not “present past.”

EXERCISE 115A, the sentence starting “I shall give him up for ever” should be listed as a 1, a first-conditional.