A Day at Our House: Classical Education With Three Under Seven

6 AM I’m up, drinking coffee and doing my morning reading in Thomas a Kempis. Peter (my husband) works this morning and won’t be in until two; he’s already gone. After I’m done, I decide I’ll do a bit of writing before the kids get up. Generally, Christopher (6) and Ben (4) sleep until eight; Daniel (18 months) wakes up around 7:30, but he’ll stay in his crib until I get him up.

7:20 Daniel decides he’s ready to get up. He yells so loudly that I go get him ahead of schedule so that he won’t wake up his brothers (they’re all in one big room). I haven’t showered yet, so I give him a bottle and sit him on the bathroom floor. He manages to unroll all the toilet paper, but I leap out of the shower before he can stuff it all into the toilet. By the time I’m out, dressed, and picking up toilet paper, it’s eight.

8:00 Christopher and Ben get up, get dressed, go potty, and wander in for breakfast. Christopher brings Gordon, his favorite stuffed animal, to help him do school. I tell him he can have Gordon as long as he doesn’t get distracted. Distraction’s a big problem this year. We eat breakfast; toast for Christopher with a boiled egg (if he doesn’t have the egg, he doesn’t concentrate very well), oatmeal with brown sugar for Ben (he hasn’t eaten anything else for breakfast in months). Daniel eats his cereal and then wanders off to pull toys out of his box. We do our catechism questions. By the time we’re done, it’s 8:50 — ten minutes before school time — so I turn on music for them to dance.

9:00 We start our math lesson. Ben is playing with his Thomas the Tank Engines in his room, so I leave him there. Gordon sits in front of Christopher’s book. Halfway through the lesson, Daniel has a catastrophic diaper, so I give Christopher a money-counting assignment and go to change it. While I’m in their room, I discover that Ben has pulled all the sheets off his bed to make a tent. By the time I get back to Christopher, it’s 9:45. Daniel’s starting to fuss. I give Christopher the rest of the lesson with Daniel hanging onto my leg, assign him the worksheet he does alone, and take Daniel back to his room for “crib time” (he gave up his morning nap some time ago, but I still put him down for half an hour of quiet play). Ben bursts into tears when I shoo him out of the room, but I promise him he can listen to a story tape.

10:20 We’re done with math, half an hour behind schedule. I tell Christopher and Ben to go ride their bikes for a few minutes while I fix a snack. When I call them in, I get Daniel up.

10:45 I start Christopher on his Spelling Workout book and then sit down to do a phonics worksheet from Modern Curriculum Press with Ben. Daniel crawls into the middle of the table and tips Christopher’s pencils over. I pull a chair up to the sink so that he can pour water in and out of cans. He pours water on the floor too, but I put a bathtowel under him and try to ignore it.

11:00 I give Christopher his sentence to copy, set up a train track for Ben behind the sofa, change Daniel’s shirt, and check Christopher’s sentence. Two words are so messy that I make him rewrite them.

11:10 Daniel’s sitting on Ben’s train track, and Ben’s complaining. I put on Peter and the Wolf for everyone’s music study and try to clean up the water on the floor. I’ve still got history and Christopher’s piano lesson to do today (I’m not doing Picture Study until he’s a little older; I tried it and he was bored, so I’ll introduce it a little later). I’m running behind.

11:30 I put Daniel in the high chair with a hot dog, send Christopher to practice his piano lesson, and sit down on the sofa with Ben to do a page of his reading primer.

12:05 In the middle of putting Daniel to bed, I hear a great disagreement in the kitchen. I march out and tell the boys to keep their mouths closed until I’m done with the baby. “Can’t I eat?” Ben asks. “Can’t I breathe?” Christopher asks. I answer this as it deserves and go back to Daniel. When he’s settled, I turn on the fans in the room to block noise and close the door.

12:15 I give Ben his art stuff — push-pins, a small cork board, pipe cleaners, scissors, paper, and magic markers — and tell him to create art. He sits at the end of the table and works on it while I read Christopher his history lesson. This week’s lesson is about the Great Wall of China. When we’re finished, he draws a picture of the Great Wall and I prompt him through a narration. I write the narration underneath, and we put the page in the notebook. I bought him a China Treasure Chest with a paper model of the Great Wall; I tell him it’s for his next history lesson.

1:10 I have to be teaching at the College by two; Peter arrives at 1:15. Daniel’s asleep; I put Ben to bed with a set of tapes (the unabridged Charlotte’s Web) and his tape recorder. Christopher’s listening to the unabridged The Hobbit on another tape recorder. (We spend a fortune in AA batteries.) I turn both tape recorders down as low as I can and tell them to be quiet. Both boys stay in bed for two hours — it’s a habit they’ve never broken. Ben’s bed is filled with toys, Christopher’s with books.

1:25 I dress at top speed; I have a half-hour drive to the College. Peter will get the boys up at three and do Christopher’s reading with him this afternoon; they’re working their way through the McCaughrean retelling of the Odyssey. When I get back, I’ll find Christopher’s narration (in Peter’s handwriting) and a picture; Ben usually draws a picture to go with the story too (although we generally can’t tell exactly what it is). 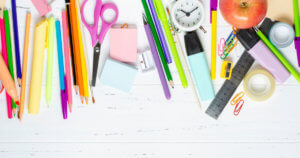 Subtraction: More Than Just Taking Away
Can you tell what these three word problems have in common?    I had 8 cookies, and then I ate 5. How many cookies did
Previous
Next
SUBSCRIBE TO OUR NEWSLETTER