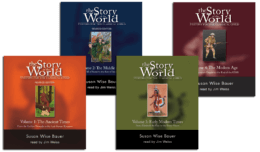 The Story of the World Vol. 1-4, Audiobook Bundle (Downloadable MP3s)

Save when you buy all four volumes of our bestselling world history for children, narrated by master storyteller Jim Weiss.

Save when you buy all four volumes of our bestselling world history for children, narrated by master storyteller Jim Weiss.

With The Story of the World audiobooks, you and your family will be caught up in a thrilling tale of heroes, villains, far-away lands, and new discoveries—a story that spans the globe. Each volume is read by voice actor Jim Weiss. 42 hours of narration!

The Story of the World Vol. 1: Ancient Times, Audiobook (Downloadable MP3s) [Revised Edition]: the Pyramids, the Great Wall of China, the first Olympics (back before they added Ping-Pong), the rise and fall of the Roman Empire, and much more.

The Story of the World Vol. 2: The Middle Ages, Audiobook (Downloadable MP3s) [Revised Edition]: you’ll meet Vikings, prophets, outlaws, Samurai, reformers, and explorers, in this thrilling story of the Middle Ages and the Renaissance. (Note to parents of boys: Did we mention there are Vikings? And a poem version of Beowulf where a dude pops a monster’s arm off in rhyming couplets?)

The Story of the World Vol. 3: Early Modern Times, Audiobook (Downloadable MP3s) [Original Edition]: you might not think that the invention of interchangeable parts would be exciting, but somehow Susan Wise Bauer makes it so. Also the American Revolution, the Pilgrims, the settling of Australia, and why the emperor of China burned so many books. Please note: This bundle includes the original edition, but there is also a new, Revised Edition available.

The Story of the World Vol. 4: The Modern Age, Audiobook (Downloadable MP3s): it starts with a palace made out of glass and a revolution started by beef grease, and gets wilder from there. Thomas Edison, Martin Luther King, the suffragettes, Indira Gandhi, and Nelson Mandela are just a few of the characters you’ll meet as the story of the world is brought up to the dawn of the 21st century.

Do you prefer your Audiobooks on CDs? We have those too: The Story of the World Vol. 1-4, Audiobook Bundle (Multi-Disc CD Set)