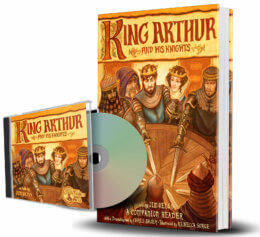 In a time of fear and danger, will Merlin’s magic, Lancelot’s bravery, and Arthur’s wisdom be enough to unite the kingdom and bring peace? In this bundle  (illustrated book and CD audiobook), beloved storyteller Jim Weiss brings tales of King Arthur and his Knights of the Round Table to life with action, wonder, and humor.

This beautifully illustrated Companion Reader is an exact transcript of the award-winning storytelling performance, available on MP3 and audio CD from Well-Trained Mind Press. The Reader can be enjoyed on its own, or used along with the recorded performance to build strong language skills.

Listen to the Jim Weiss stories on the CD, read along in the book to improve fluency, vocabulary, and grammar, and then speak great words and sentences out loud by practicing and performing the short, accessible dramatic versions of Jim’s performances.

Chris Bauer is a writer and actor based in Chicago.  He received his BA in Drama from the University of Virginia in 2014, and since then has been acting and writing in Virginia, New York, and Chicago, doing film and theater for both children and adults.  He is currently studying acting and writing at The Second City.