King Arthur Gets a Makeover (Not THAT Kind…)

It happened long ago, in the misty past, in a time we call The Dark Ages…in 1991. A wandering bard named Jim Weiss created a thrilling tale of King Arthur and his brave knights of the Round Table. People listened to the tales of Jim the Bard on ancient devices called “tapes.”

Now, a “tape” was something you could listen to, like Spotify or iTunes, except not like that at all. It had been cursed by a sorcerer so that it would be full of hisses and pops and background hum, and it was hard to find your way to a particular part of the story without constant “rewinding” and “fast-forwarding.” This was quite “tiresome.”

But now, Jim the Bard and Well-Trained Mind Press have re-mastered the original “tapes” so that you can listen to King Arthur and His Knights in a beautiful new edition (available in MP3 or on CD).

We asked Merlin to lift the spell of poor audio quality, so this new edition features crisper sound (listen to the audio comparison below). 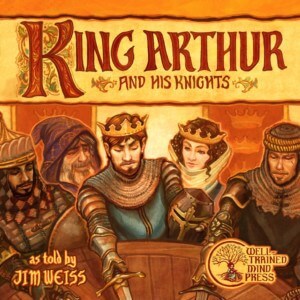 It has also been divided into 10 tracks for easy navigation. Furthermore, it has a gorgeous new cover by artist Rebecca Sorge (that’s “Sorge” like “George,” not “Sor-jah” like “Georgia”).

Find the new edition of King Arthur & His Knights here!

[And for you nostalgia buffs, the older edition is still available on CD for a low price, while supplies last.] 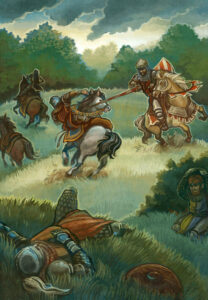 We’ve also created an exciting new Companion Reader with colorful illustrations of these classic stories, plus instructions and a script so kids can stage their own play!

(And yes, we included directions about “How to do Stage Combat without actually stabbing anyone.”)

Stories of the World, for the World’s Children